According to Nassau County Third Squad detectives, a house fire at 1 Hillside Blvd. in New Hyde Park occurred on May 12 at 6:36 a.m. Upon arrival, police observed heavy smoke coming out of a third-floor window. Police kicked in a rear door and were able to safely evacuate six occupants and a dog that were on the second floor. There were no injuries reported. The Nassau County Fire Marshall responded as well as the Floral Park Fire Department, South Floral Park Fire department, Floral Park Center, New Hyde Park, Garden City Park, Mineola, and Manhasset fire departments. There were 12 fire apparatus and 75 fire personnel on the scene. The damage was moderate to heavy. The investigation is ongoing.

Herricks High School student Carolyn Lau has been selected as Grand Champion in Category D of the Walt Whitman Birthplace Association’s 34th annual Student Poetry Contest, “Leap Day.” Her poem, “Counting,” will be read by the WWBA’s executive director during a virtual awards ceremony on May 31.

“It’s a beautiful poem whose focus is interpersonal relationships but one whose scope is far wider and resonant for today,” Herricks High School teacher Alan Semerdjian said. “She’s an amazing writer and it’s a pleasure working with her and helping her shape her voice.”

Syosset Superintendent of School Dr. Thomas Rogers found a fun, unique way to educate his students during the coronavirus pandemic. With students learning from the comfort of their homes, Rogers took to YouTube for some original teaching.

Rogers is showing his students how to juggle during the pandemic. That’s right, juggle. And he’s connecting it to mathematics, too. Rogers elaborates on his juggling performance by explaining different angles that are used. You can watch the full video on the Syosset School District’s YouTube page.

The staff organized a senior celebration parade, making it their mission to drive by each soon-to-be graduate’s house to cheer them on. Staff members decorated their vehicles with uplifting signs, balloons and more to show how much they care about the graduating class.
Seniors and their families were encouraged to stand outside their houses as the cars passed. Some members of the Class of 2020 decorated the outside of their houses with graduation signs and wore attire representing their post-graduation plans, whether it be college, joining the military or pursuing a specific career.

Hicksville High School (HHS) sophomore Rohan Majreka and his sister Rhea, a 2017 HHS graduate, and their friends recently decided to do something to express their thanks and gratitude to the workers they described as our “Health Heroes.”

“We put together 300 snack bags with personalized thank you notes and delivered them to the Nassau County Police Department, NYU Winthrop and Mercy Medical Center.”

The Manjrekar siblings subsequently raised more than $500 through family and friends.

“We will be making 250 additional snack bags filled with cookies, chips, and personalized notes to continue to support our Health Heroes.”

Farmingdale State College’s University in the High School program earned accreditation by the Accreditation Commission of the National Alliance of Concurrent Enrollment Partnerships (NACEP). University in the High School helps bridge the gap between high school and college-level study, according to the school. The program is designed for academically-motivated high school juniors and seniors wanting to earn college credits. The credits, earned at their high school at reduced tuition, may be used to pursue a degree at Farmingdale or transferred to another institution. Courses from 19 departments in Farmingdale’s four schools are offered: health sciences, business, engineering technology and arts and sciences.

Massapequa resident and mom Monica Guargiulo, was recently announced the winner of a $50 Visa Card from Massapequa Takes Action Coalition’s (MTAC) Toolkit for the Massapequa’s

Marijuana and Vaping Prevention Campaign. The campaign provides key messages and facts in the prevention of marijuana misuse and vaping. Go to www.mtacoalition.com to learn more about the campaign.

Over the past couple months, the Manhasset Association of Chinese Americans (MACA) has undertaken a number of initiatives aimed at helping the community get through the coronavirus pandemic. MACA has donated person protective equipment to organizations across the North Shore, including North Shore University Hospital, the Manhasset-Lakeville Fire Department, the Nassau County Police Department Sixth Precinct and St. Francis Hospital.

Additionally, MACA is working with local restaurant owners to deliver hot lunches once a week to St. Francis, the Heart Center and Northwell Health LIJ. In recognition for their efforts in making hot meals for medical workers, MACA members Gale Zhang and Jian Yang were both recently named local heroes by the Town of North Hempstead.

Great Neck resident Tamara Toro was named one of the Town of North Hempstead’s local heroes last week for her part in an ongoing campaign to deliver meals to essential workers throughout the community. Toro’s Facebook group “Food is Love” has mostly focused on getting meals from restaurants to workers at North Shore University Hospital in Manhasset, but has also brought food, encouraging cards and smiles to NYU Winthrop Hospital and the Great Neck Vigilant Fire Company. The GoFundMe page for the group, funds from which go to buying food from local restaurants for donation, has raised more than $8,800 dollars since it was created at the end of March.

Anybody who would like to contribute can visit www.bit.ly/2T0V5RI to donate to the group. 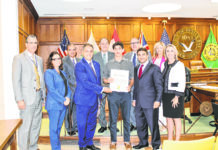 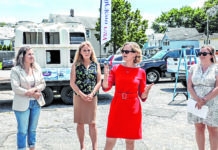 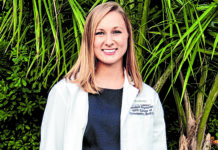