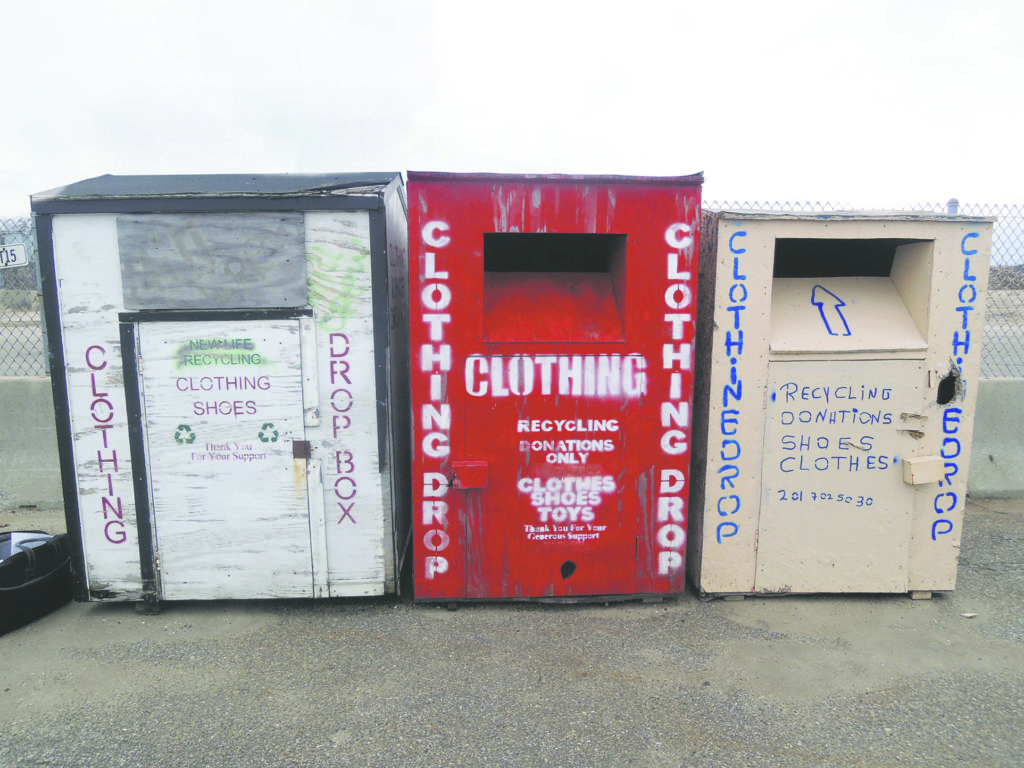 A newly-proposed local law in the Town of Oyster Bay, which was presented to the board in a public hearing last week, will add some restrictions for those who put out collection bins for used clothing.
“As you may be aware, there has been a proliferation of a number of collection bins,” said Ralph Healey, special counsel to the Town of Oyster Bay, to the board at the hearing. “In some instances, commercial enterprises have been soliciting donations and other personal items under the guise that these are being solicited for charitable purposes. That has led New York State and [Nassau County], plus a host of local towns and villages, to enact laws regulating the placement, construction and the use of such bins throughout their jurisdiction.
The law, which was drafted at the request of the department of planning and development, would add a new chapter to the town code and states that drop-off bins could only be used by 501(c)(3) nonprofit entities. The places where the bins could be placed would also be limited. Areas that are in a light industrial zone, general business zone or that are owned by the nonprofit organization are permitted to have bins out. However, a single property may only have up to two bins on display.
“Some of these restrictions are found in other local laws,” Healey said. “Our law is unique because they contained all of these protections.”
The bins must clearly state the name and contact information of the nonprofit organization. They must also maintain the bin in accordance with the laws and regulations that the department may pass in the future. Additionally, any bins must have a sticker on them that indicate that they are permitted to be put out. These stickers would need to be approved by the department of planning and development, but there is no fee.
Violations of these rules would result in a $250 fine for each day per offense and would be prosecutable in Nassau County District Court.
Councilman Louis Imbroto said that this law came out of the Quality of Life task force looking into the proliferation of clothing drop-off bins in parking lots throughout the town. Healey stated they’ve been working on the law for almost a year.
“Many of [the bins] are fraudulent,” Imbroto said at the hearing. “They are not run by nonprofit organizations. We are trying to address this issue and clean it up so that only legitimate nonprofit agencies have these bins in our town and won’t interfere with our quality of life.”
Fradulent donation bins have been an issue in the town. In the last few years, the town has held multiple press conferences during the holiday season warning people of bins that have been set up in the town to trick residents.
“By allowing private entities who are not nonprofits to put out bins, there’s a bunch of problems like many of them not being constructed properly,” Supervisor Joseph Saladino said, addressing the room. “But as they get the clothing, it keeps the clothing from reaching the organizations that are nonprofit. This [new law] helps the nonprofits who are legitimate.”
Saladino noted that the town has been in the process of picking up bins that seem fradulent, whether they have a fake number or do not have any identification on them. He also stated that there is concern that random bins being placed in parking lots have led to limited parking for some commercial entities.
While no one spoke against the proposal at the hearing, the town did receive an opposition letter from Maryland-based Secondary Materials and Recycled Textiles Association (SMART), who represents for-profit collection bin operators. In the letter, executive director Jackie King stated that keeping for-profits from having bins would actually be harmful to charities, as well as the environment. The organization is urging the town to revise the proposal to allow for-profits to put out bins.
“It is unclear whether the proposed language would ban bins operated by those for-profit textile recyclers that share revenue with charities,” King wrote. “If so, such a prohibition would eliminate an important source of funding for numerous charities who rely on these resources to support their activities. Banning clothing collection bins that are operated by solely for-profit textile recyclers would negatively impact meaningful waste diversion efforts and recycling goals in place in New York and throughout the country.”