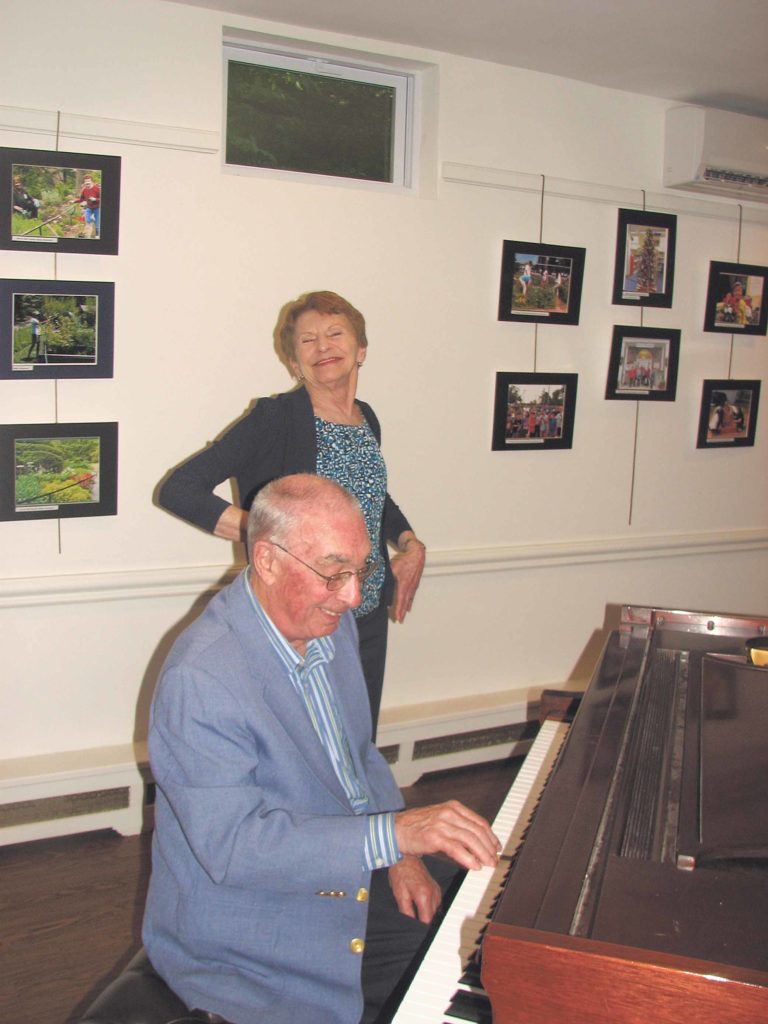 Avian Artist Al Meyer is being showcased at the Locust Valley
Library, courtesy of the Locust Valley Garden Club (LVGC). His wife, Marcy is the club’s social chair, and chairs Barbara’s Garden and Garden Therapy for seniors at Rosewood. Fifteen of Meyer’s hand carved, expertly painted birds are in the first-floor display case at the library.

Meyer has a long and interesting career path. He started working in the family business, Meyer Auto Repair, located on 83 Birch Hill Rd.

“Today there are five businesses there. I worked for 30 years repairing cars, something someone else built and fixing it. I had an urge to make something myself.” He began making furniture, “But how many tables and chairs and grandfather clocks can you have.”

Meyer sold the business and took to the sea in a tugboat.

“I couldn’t be a captain because my night vision wasn’t good enough for steering. But I was enjoying it and stayed on as long as I could. It was very physical and all the other deck hands could have been my sons. “I thought, I better stop while I have all my fingers and hands.”

His bird carving began during the tugboat years. “It was working a week on and a week off and at that time I had the urge to create something.” His interest turned to birds. “As long as we’ve lived here, Marcy and I have had a bird feeder, she’s the gardener, and we get great pleasure looking at the songbirds. Most of the birds I carved are ones we have seen on our travels around Locust Valley.”

His first bird was going to be a Bluejay. Using an Exacto knife, he carved away. His first attempt, “it was like nothing you ever saw, so I got a book about bird carving.”

“It’s a hobby of its own. I’ve done more with a grinder than with a carving knife,” He said You rough out the design with a saw and then do the details with a Dremel grinder and drill. They are carved out of bass wood. The stands are driftwood from local beaches. The bases were made by Al’s father.
There is a Bluejay on display. “I did it later on, when I knew what I was doing.” As to a favorite, he thought for a moment. “The little wren. It’s a very small bird and has a nice expression.”

When he left the tugboat job, he took another outdoor assignment, as a groundskeeper for the Locust Valley School District athletic fields. “And I didn’t have to commute!” That was a good fit in a way since he had graduated from what was known as the LI Agricultural and Technical Institute in Farmingdale, currently Farmingdale University, where he studied engineering. Meyer, 84, put aside his carving tools about 30 years ago when he was diagnosed with Parkinson’s.

“My hands shake, so there will be no more birds carved.”

Meyer is a man of many talents. At the LVGC 75th anniversary party in the Locust Valley library social room, he played the piano. For many years he played the accordion with a local group. Marcy and Al met in New Orleans when he was in the service, during the late 1950s. “He’s very talented, but he doesn’t think so, himself,” Marcy said.