Hillary Foxsong credits living in Oyster Bay to her success as a professional musician. It all began when Foxsong, a mail carrier who will celebrate her 25th anniversary with the Oyster Bay Post Office this May, attended one of the village’s street fair-like “Cruise Nights” in June of 2005. They went to Canterbury’s where outside, folk-rocker Glen Roethel was playing guitar and singing. Foxsong joined in, singing harmony. Oyster Bay’s famous resident Billy Joel passed by and joined in too.

After the well-received impromptu performance, Roethel invited Foxsong to sing with him anytime. She did and at a Cruise Night the next summer, the casual duo was this time joined by Roethel’s friend, musician Stuart Markus, who added a third harmony.

“That was my first experience actually performing live with a band,” said Foxsong, who before had sung mainly in school and church choirs and karaoke bars. She had learned to sing harmony from her grandmother, who was a professional singer.
Foxsong, Roethel and Markus formed a band called Gathering Time, known for their versions of sixties and seventies classics and also for their original tunes. The band describes themselves as a “high-energy Peter, Paul & Mary or a co-ed Crosby, Stills & Nash.” In 2007, the trio went to their first Northeast Regional Folk Alliance (NERFA) Conference, which is attended by more than 700 folk music performers, agents and others in the business each year.

Nov. 7-10—with Gerry McKeveny in place of Roethel—marked Gathering Time’s 12th NERFA. Held at the Crowne Plaza in Stamford, CT, the weekend is packed with opportunities for artists to perform in showcases that happen on the formal stage, hotel rooms and even in jam sessions that break out in the hotel lobby.
“When you hear so much good music, you come away feeling inspired,” Foxsong said. “It makes you a better musician.”

“There is so much talent creating all different kinds of beautiful music,” said Friedman, who added that after attending NERFA six times, going “feels like coming home to a musical family.” Rorie Kelly, who grew up in Bayville and often attends, appreciates that the NERFA community has welcomed her pop-rock music that she says “doesn’t really fit in the traditional folk box.” 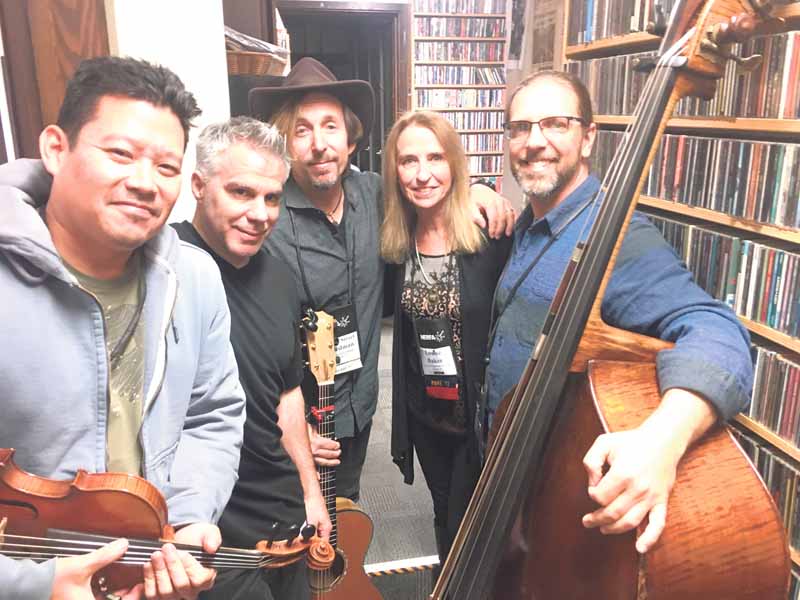 Foxsong’s band has been chosen for NERFA’s most selective showcase opportunities, prominent folk festivals and has toured as far as Europe. The band’s most recent album, Keepsake, reached number one on the International Folk DJ Chart. Their fifth album, Old Friends, is expected early next year.

Foxsong says that some post office customers know about the band. “You hit it off with some folks and you share more of your lives with each other,” she said. Oyster Bay Post Office workers, however, are well aware.

“I don’t know if she sings while she delivers mail but I know she sings in the office,” shared Tony Reyes, Foxsong’s former supervisor, who added that Foxsong inspired him to return to his musical passion—DJing. Foxsong appreciates the support for her music career that she’s received at the post office.

“My bosses are really understanding about my taking a day off here and there to play gigs,” she said. In terms of musical goals, Foxsong would love to break into mainstream radio and write a hit song.

“Wait a Minute Mr. Postman” and other songs about the mail have been big hits—but Foxsong tends to focus her songwriting on other things. She invites all to come to a show to find out. Visit the band’s website, gathering-time.com and the websites of the other artists listed (rogerstreetfriedman.com and roriekelly.com) for upcoming events.

“The best way to support local music is to listen to it,” said Friedman. “Streaming numbers are now important for musicians to become more well known and to gain traction outside of their home area. But of course coming out to see them perform live is important as well.” There it is—“Signed, Sealed, Delivered.”