The annual Oyster Festival avoided cancellation going into its 36th year after the Oyster Bay Charitable Fund recently announced it’s new lead sponsor. The Blue Point Brewery will be sliding into this spot for the event that takes place on October 19 and 20. The Patchogue-based business quickly committed to taking the title sponsorship after learning the long-standing tradition of the Oyster Festival was in jeopardy,
Blue Point Brewing Company will host the first-ever Blue Point Beer Garden at the 2019 Oyster Festival. The area will feature six different Blue Point beers, both new and old, including a special IPA brewed just for the festival. In addition, they will bring friends from Billion Oyster Project, the #TallMotherShucka Keenan Boyle and will be selling Blue Point merchandise all weekend.
“Many of our employees, families, and friends have been going to this festival for their entire lives,” Blue Point Brewery co-founder and president Mark Burford said. “To hear that there was a possibility of it not happening after 35 successful years was shocking and something we didn’t take lightly.”
The 2019 Oyster Festival spans the geography of more than three football fields, covering downtown Oyster Bay to the iconic waterfront and Theodore Roosevelt Park. This year’s attractions include live entertainment, artisans, scavenger hunts, pirate shows, amusement rides, ships, giveaways, photo contests and the iconic oyster eating and shucking contests. Attendees will be able to eat their way through the food courts, where volunteer chefs and culinary pros work side by side, cooking and serving dozens of unique oyster, clam and other seafood concoctions along with traditional festival fare.

The Oyster Festival is a project of the Oyster Bay Rotary Club and funded by the Oyster Bay Charitable Fund. Profits from all food court sales directly support 25 participating local charities while proceeds from carnival rides and merchandise sales is donated to additional charities supported by the Rotary throughout the year. Admission is free and most activities are free.
Founded on Long Island in 1998, Blue Point Brewing Company got its start in a boatyard in Patchogue. Known best for their award-winning Toasted Lager, Blue Point offers a variety of year-round beers, seasonal brews, and brewpub locations in both Patchogue and DUMBO, Brooklyn. 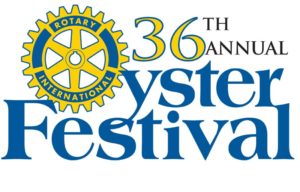 “Blue Point is a great partner for us,” said Jim Fuccio, Festival Chairman and member of the Oyster Bay Charitable Fund. “The Blue Point Beer Garden will enhance the festival and all the attractions, ensuring guests have a terrific experience.”
The Blue Point Brewing Company has been dedicated to sustainability and water restoration efforts through various partnerships. These efforts include their work with the Billion Oyster Project, an organization that is working to restore one billion live oysters around 100 acres of reef by 2035. Their reefs provide essential environmental services by improving water quality, creating habitats for thousands of other species and helping protect shorelines from storm damage. Festival-goers can expect to see Blue Point’s Good Reef Ale made in partnership with the Billion Oyster Project. For every pint sold, five oysters will be restored to oyster reefs in New York harbors. Those five oysters can filter up to 250 gallons of water per day.

Oysters played a huge part in New York City and Long Island’s rich histories. Credit goes to the fact that these waters contained nearly half of the world’s oyster populations for years. Given Blue Point Brewing Company’s commitment to preserving that history and keeping oysters a part of Long Island, it’s no surprise that Blue Point hosted its first oyster festival on Oct. 5 called Oyster Ball at the brewery’s Patchogue home base.
At the recent press conference held at Roosevelt Memorial Park, Burford reinforced his brewery’s commitment to the success of the Oyster Festival and plans to be part of the 2019 festival and future Oyster Bay Oyster Festivals to come.
“We’re happy to be part of keeping the great Oyster Festival tradition alive. Here’s to more oysters and of course, beer,” he said.