Seven swastikas. All in one park. In Oyster Bay.

“My grandfather Boris is a refugee of the Holocaust,” Legislator Joshua Lafazan, who represents Woodbury, said in a letter to his constituents. “This symbol brings so much pain to my family, and for so many families like mine, who suffered at the hands of its acolytes.”

Lafazan, like plenty of others in the Town of Oyster Bay, is frustrated. He’s upset. Most of all, he’s disappointed.

The sentiment is strong throughout the community in the days after Second Precinct police officers responded to reports of seven swastikas drawn at the picnic pavilion at Theodore Roosevelt Memorial Park on Aug. 8. The report came in at 8:40 a.m. that day, and police said they were drawn between Aug. 7 and 8.

“This brazen act of vandalism is despicable, and unfortunately, not an isolated incident,” Nassau County Executive Laura Curran said. “We cannot look away from the fact that bigotry, including anti-Semitism, is on the rise along with other forms of hatred that seek to divide us and turn us against each other.

“We will not tolerate it in Nassau, and we certainly will not look the other way. We will loudly condemn white supremacy in unequivocal terms so it never knows comfort in our communities.”

The swastikas were about 10 inches in size, according to reports, and were drawn right on the pavilion’s structure. The graffiti was painted over rather quickly, but the symbolism of this happening won’t go away anytime soon.

“Hatred, bias, or intolerance of any kind have no place in our town,” Town of Oyster Bay Supervisor Joseph Saladino said in a statement. “It is imperative that we speak out against hate in our communities and bring to justice the person or persons responsible for this anti-Semitic graffiti. We will not tolerate these detestable acts, and we call on anyone with information to come forward and help law enforcement catch the perpetrators.”

At the time of publication, police have not identified any suspects in connection with the graffiti marks.

But the day after the findings were publicized, a coalition of interfaith leaders, Nassau County Police Department officials and politicians came together to announce a reward for anyone who has information leading to the indictment or arrest of the person(s) responsible for defacing the park.

This group came together essentially overnight, and announced the reward will be up to $20,000 for those who help police identify who did this. The reward consists of $5,000 from Nassau County Crime Stoppers and $15,000 in pledges from concerned residents and community leaders. 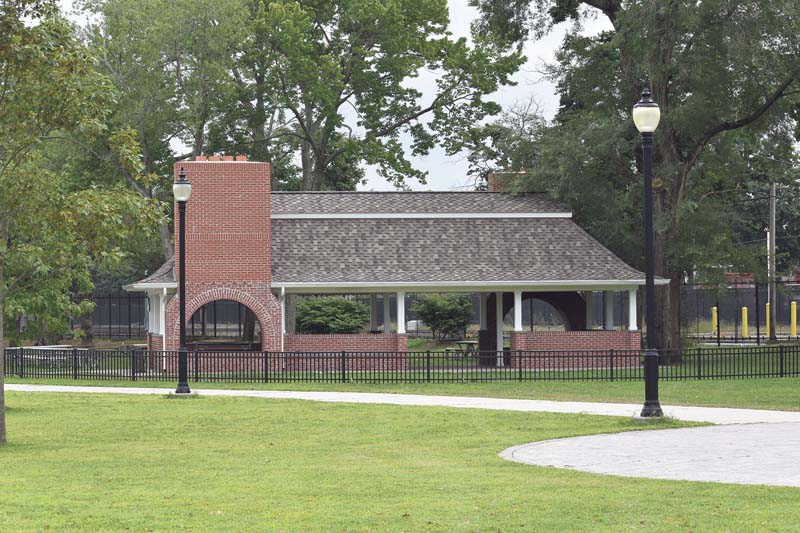 “We will not stand idly by as hatred is allowed to flourish,” Assemblyman Charles Lavine said. “We must call it out as soon as it occurs. Left unchecked, it metastasizes.”

Anyone with information about the swastika incident is urged to contact Nassau County Crime Stoppers at 1-800-244-TIPS. All callers remain anonymous.

On Aug. 13, Nassau County District Attorney Madeline Singas proposed a state-wide law that would mandate New York State students be taught about the swastika and noose, explaining why they are hate symbols and ones that intimidate others. Students from grades six through 12 would receive this specific education in their curricula.

“If we can educate our youngsters about the pernicious nature of these symbols, I’m confident those hate symbols and those acts will decrease,” Singas said at a press conference.

At the press conference, Singas was joined by Holocaust Memorial and Tolerance Center of Nassau County (HMTC) Chairman Steven Markowitz and Director of Education Helen Turner, as well as state Senator Todd Kaminsky.

Since Aug. 2017, Turner has been running a unique program, titled “Deconstructing Symbols of Hate.” It was created as a direct response to an increasing number of requests from schools to deal with swastikas, nooses and other symbols of hate. The program features several components, such as being taught the history behind these symbols of hate, the impact that these symbols have on Holocaust Survivors and other victims of hate crimes and anti-bias incidents and how to stand up when they see acts of intolerance.

The program has been utilized across Long Island as a response to bias and hate incidents, as well as a preventative measure by several schools. HMTC has served more than 4,000 students with this program and anticipates that number to increase this school year.