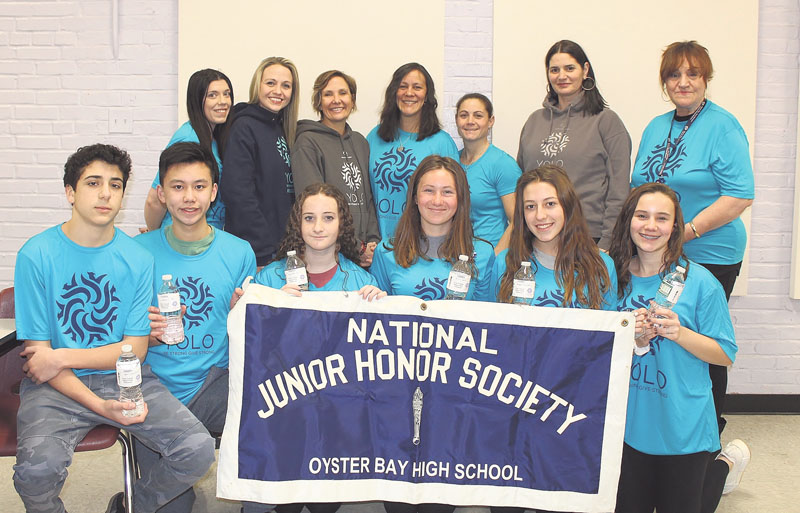 The Oyster Bay community is filled with people who do good deeds for others and that charitable mindset has trickled down to the children, many of whom want to do their part in giving back to the community. Fundraising efforts for the YOLO Strong Foundation are underway by Oyster Bay High School’s chapter of National Junior Honor Society (NJHS), with hopes of exceeding its fundraising goal of $4,000.

The chapter is expecting its 93 members to work together to ramp up awareness and donations for the organization. YOLO—You Only Live Once—was formed six years ago by a group of local women with a desire to give back. The foundation strives to “make a difference in the lives of sick children and their families in local communities who are suffering from adversity and are trying to overcome life-changing circumstances.” Since its inception, the foundation has grown to more than 100 members and now teens and kids are getting involved.

Freshman Arianna Wulffen suggested the charity as a fundraising service project after a family friend succumbed to cancer. Wulffen’s mother, Laura Escobar, was introduced to the organization and found that being involved was a way to remember her friend and honor her life.

“Karen was a very special person to me and I miss her so much,” said Wulffen. “Our family is trying to make a difference in the world and Karen is our inspiration.”

While the goal of YOLO is to raise money for charity, the efforts of these women goes beyond a typical gala-type benefit.

“They also compete in obstacle course races to raise funds and awareness for local children battling illnesses and help children with special needs to gain access to much needed medical devices and technology,” explained Wulffen.

Over the next several weeks, members of the NJHS will be collecting change to fill plastic water bottles wrapped in an OBHS/ YOLO label that reads, “Small Change Makes a Big Difference.”All monies raised will go directly to the organizations supported by the YOLO Foundation. They include: The Morgan Center, a preschool in Hicksville for children undergoing chemotherapy treatments; Danny’s Wish, which provides iPads (with special software) for underprivileged non-communicative children with autism; Contractors for Kids, an organization that assists a sick child and his/her family who are trying to overcome an unforeseen life changing circumstance and will help pay bills; and Angela’s House, which provides medical devices for children with life threatening diseases who are medically fragile and chronically ill.

To make a donation, visit www.crowdrise.com/o/en/campaign/oben-njhs.