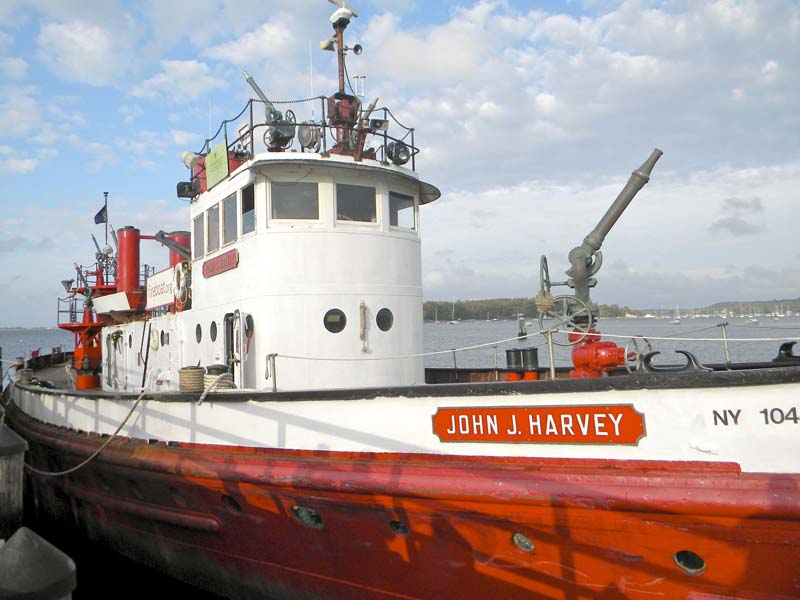 The John J. Harvey fireboat is coming back to Oyster Bay for the Oyster Festival. The fireboat, launched in 1931, served the City of New York and New York Harbor until she retired in 1994. She was a historic first: the first fireboat powered by internal combustion engines, the first that could pump and maneuver simultaneously, and the largest, fastest fire fighting machine of her time, capable of pumping 18,000 gallons per minute.

John J. Harvey was named for FDNY pilot John J. Harvey who was killed aboard fireboat Thomas Willett while fighting a fire aboard the North German Lloyd Line’s SS Muenchen. Harvey assisted during such notable fires as the Cunard Line pier fire in 1932, the burning of Normandie in 1942, and the ammunition ship El Estero during World War II. She served the FDNY until her retirement in 1994.

On September 11, 2001, John J. Harvey was recalled to service by the FDNY and reactivated as Marine Company 2. Alongside the FDNY fireboats, fire fighters and John D. McKean, she pumped water for 80 hours until water mains in lower Manhattan were restored to service. Harvey’s action that week was the subject of countless news articles and a 2002 Maira Kalman book. The National Trust for Historic Preservation gave the Harvey a special National Preservation Award to recognize this incident. 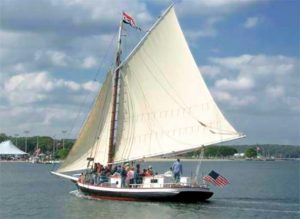 Saved from the scrap yard by a dedicated group of volunteers, she now serves as an operational museum and education center.

Last summer, multidisciplinary artist Tauba Auerbach, evoking the DAZZLE camouflage patterns painted on WWI and WWII vessels to confuse enemy U-boats, unveiled New York’s own 21st-century dazzle ship; John J. Harvey. Co-commissioned by the Public Art Fund and 14-18 NOW with support from the crew and volunteers of John J. Harvey, this magnificent work will be available for public viewing at the Oyster Festival. Free at the West End Waterfront Pier.

Also present will be Christeen, a 40-foot, gaff-rigged sloop, owned and operated by The WaterFront Center, a not-for-profit community sailing and marine education center located in Theodore Roosevelt Park. Christeen connects more than 3,000 adults and children to the water each year through school field trips, public sails and private charters. The oldest surviving oyster sloop in North America and a National Historic Landmark, Christeen was originally built in 1883 for Captain William Smith in Glenwood Landing for harvesting oysters in Oyster Bay and Cold Spring Harbor. For more than 125 years, she was used as an oyster dredge and a cargo carrier between Connecticut, New York and New Jersey. After surviving 16 major hurricanes, numerous Nor’easters, two sinkings and severe neglect, Christeen returned home to Oyster Bay in 1992. Volunteers worked with a full-time shipwright and raised more than $300,000 to completely restore and relaunch Christeen in 1999.

The Christeen Oyster Sloop Preservation Corporation is building a replica of the historically significant Ida May oyster dredge. The original Ida May was built in Bayville by Frank M. Flower in 1925 as one of the oyster industry’s first powered dredges. The completed replica will be owned and operated by the WaterFront Center for public recreation and marine and maritime education. The mission of the Christeen Oyster Sloop Preservation Corp. is “to preserve Oyster Bay’s maritime heritage by involving the community in traditional boatbuilding projects.” Many volunteers under the guidance of local shipwright Josh Herman are learning new skills working together to create a significant vessel.

Since 2009, Building J, a large shed on the Western Waterfront, has been transformed into a boatbuilding shop. The Christeen Corp is raising capital complete the project.