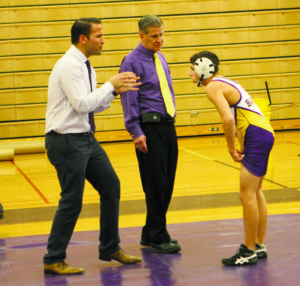 Coach to be inducted into the National Wrestling Hall of Fame

Oyster Bay High School Varsity Wrestling Coach Doug Axman has dedicated his life to one of the oldest forms of combat. His long and distinguished wrestling career continues to enhance opportunities for the next generation of grapplers. For this kind of commitment, Axman is being inducted into the National Wrestling Hall of Fame on Friday, April 28, at the Melville Marriott.

Axman developed his skills as a wrestler at Walt Whitman High School in Huntington Station before moving on to hit the mat at Farmingdale Junior College. The head wrestling coach at Farmingdale, legendary Hall of Famer Bob Hartman, imparted his love for the sport to all of his wrestlers. It was from here that Axman learned from perhaps the best junior college coach in the country. He went on to enhance those skills under Coach Don Murray at Brockport University.

From here, Axman began his coaching career in 1973 as the assistant wrestling coach at Plainview High School. The following year, he moved on to Locust Valley High School, where his teams excelled on the mat during his 33-year tenure. As an assistant coach for 14 years and then head coach for another 19, Axman put his heart and soul into the Falcon Wrestling Program. The results were immediate as the wrestlers began to achieve unparalleled success for the program. During his career at Locust Valley, Axman produced championship teams and more than 100 individual champions.

After retirement, Axman joined the wrestling program at Oyster Bay High School, where he continues to apply his coaching skills as his Oyster Bay Baymen wrestlers pile up championships.

The Nassau County Wrestling Coaches Association (NCWCA) has named Doug Axman Conference Coach of the Year several times and he was also named the Deputy Ray Downey Assistant Coach of the Year. He has been past president of the NCWCA and has been chairman of the scholarship and Ad Hoc committees. In addition, Axman continues to run the prestigious annual Nassau County Wrestling Awards Dinner.

Wrestling enthusiasts could not find a more dedicated individual who has given his time to help the youth of his community in ways that go beyond competitive sports. SADD was founded in Wayland, MA in 1981 as Students Against Drunk Driving. Shortly afterwards, Axman founded the first SADD Chapter in Nassau County in an effort to encourage students to make positive choices. The organization was subsequently renamed Students Against Destructive Decisions in 1997. Axman has also helped young wrestlers strengthen their skills and character as the director of the All American Wrestling Camp and as the associate director of the Competitive Edge Wrestling Camp. He has worked his entire professional career to provide opportunities for wrestlers to succeed on and off the mat.

For his selfless dedication to so many crucial aspects of his sport, he will be the latest inductee into the National Wrestling Hall of Fame.