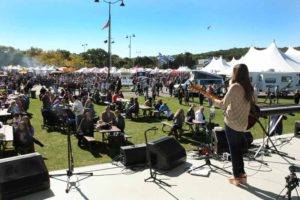 The opening ceremony begins on Saturday, Oct. 15, with Jerome Bell singing the National Anthem at 12:15 p.m.

12:30 p.m. Four Way Street: Crosby, Stills, Nash & Young are best known for their beautifully crafted vocal harmonies. Four Way Street has what it takes to recreate and deliver exactly what you would expect from a CSNY tribute. Their harmonies are built around three outstanding singers (including two brothers), each bringing unique talent and timbre with meticulous attention to detail that truly make the whole greater than the sum of its parts. This five-piece ensemble captures the full dynamic range of the CSNY song catalogue, from the softest ballads to the hardest rockers. The members of Four Way Street have performed with some of the top tribute bands on Long Island and the New York tri-state area, including Fast Lane (Eagles); Copperline (James Taylor) and Badlands (Springsteen). They are five seasoned musicians who share a common love for, and dedication to the songs of Crosby, Stills, Nash & Young. Visit www.4waystreetny.com.

1:45 p.m. Jerome Bell: This former Top 40 American Idol contestant and Off Broadway star returns to the Oyster Festival performing a rhythmic mix of originals and hit songs including his newest iTunes charting single “Rainbows (Starting Over).” Bell is currently performing with Jenna O’Gara in “The Music of Adele & Sam Smith,” which can be seen on Nov. 9, at the Cutting Room in New York City. Visit www.adelesamsmithtribute.com.

3 p.m. Penny Lane: This Beatles tribute band relies on its pure sound and strong, tight vocal harmonies to recreate the legacy of The Beatles, note-for-note. You can expect to hear a selection of Beatles hits from all of their periods, an experience that always leaves crowds cheering for more. Visit www.pennylanetribute.com.

4:15 p.m. The Electrix: The Electrix is a group of accomplished musicians, each with a lifetime of diverse experience in the music field, consisting of Jim Fleming on electric and acoustic guitar, mandolin, fiddle and vocals; Ray Kairys on electric and acoustic bass guitar; Jeff Naimoli on drums, percussion and vocals and Mike Nicita on drums and percussion. The Electrix have been together since 1995 and are recognized as one of the leading jam bands performing classic rock of the Grateful Dead and Allman Brothers, other related genres of music, and original compositions. The Electrix weave in and out of intense jams with an incredible amount of enthusiasm and feeling, adding their own interpretation and style. The Electrix have had the opportunity to share the stage and perform together with such notables as the late drummer Levon Helm (The Band), the late fiddle player Vassar Clements (Old & in the Way), pedal steel guitarist Buddy Cage (The New Riders of the Purple Sage), and guitarist/vocalist Michael Falzarano (Hot Tuna & New Riders). The Electrix have opened for The New Riders of the Purple Sage, The David Nelson Band, Railroad Earth, The Robbie Krieger Band, Commander Cody and have been involved in shows with Jorma Kaukonen, Peter Rowan, Umphrey’s McGee, David Gans and the late Dick Latvala. Visit www.theelectrix.com. 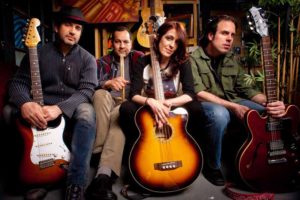 11 a.m. Joe Taylor: Taylor’s album Anything’s Possible captures the magic and vibrancy of his live performances that combine stellar songwriting, soaring tones and stripped down instrumentation, allowing Taylor’s unique artistry to connect with his listeners. The CD is a collaboration with Jeff Gross and Grammy-winning engineer Matthew Spindel, who produced the song “The Sweetest Tune.” Most recently Taylor has released two songs—“Build This House” and “Don’t Change”—recorded, produced and engineered by Jane Getz, Bob Tucker and himself and are available on iTunes, Google Music and CDBaby. Visit www.Joetaylorofficial.com.

1 p.m. Jessie Chris: Jessie Chris, at 18, was the youngest performer at the CMA Festival and has opened for iconic artists Luke Bryan, Chris Young, John Rich and Billy Ray Cyrus and has performed at The Country Music Hall of Fame. She has also recorded an acoustic version of the 98 Degrees hit song “I Do” with Jeff Timmons of 98 Degrees. Just last month she was selected to perform at the William Morris Speakeasy Showcase in Nashville. Her first album, Wildfire, was recorded at the Legendary Dark Horse Studios in Nashville and her new single, “In The Meantime” was released on May 31 and is currently being played nationwide on country radio to include Radio Disney Country. www.jessiechris.com

2 p.m. Matt Grabowski: After multiple tenures with bands based out of Long Island, Matt Grabowski began solo performing right out of high school, covering Long Island from Montauk to Manhattan. With influence ranging from Harry Chapin to Hozier, Grabowski’s music contains storytelling lyrics laid on top of music that falls somewhere between Americana and alternative. In 2016, Grabowski was named winner of the Gold Coast Arts Center’s “Your Big Break,” a competition entered by 1,500 contestants in the New York City area. Having already played hundreds of shows, Grabowski continues to perform in the New York tristate area multiple times each week. His debut single, “Bring The Rains (Down)” is now available on iTunes, Spotify, Amazon Music and digital distributors everywhere. Visit www.thebiggrabowski.org.

3 p.m. Iridesense: Consisting of Tara Eberle-Drouin on vocals/bass guitar; Rick Eberle on vocals/rhythm guitar; Rob Viccari on lead guitar and Rich Drouinon drums, this power pop band formed on Long Island in 1993. Their music can be heard on Nickelodeon in the shows Zoey 101 (featuring Jaime Lynn Spears) and Drake & Josh. They’ve also been featured on MTV shows such as Pimp My Ride, Room Raiders, NEXT and on an episode of the show Boiling Points. Their “Secret Constellation” three-song EP was released in mid-March 2013 and marks their best effort yet, having been produced and recorded by David Caggiano of Betamax Artist Development with the masters being done at Maor Appelbaum Mastering. Visit www.iridesense.com.

4 p.m. Turnpike Joe and the Traffic Jam: Turnpike Joe & The Traffic Jam, New York’s premier classic rock/party band, has been a major force on the Long Island music scene since 1977. The band has expanded it’s gig turf to the New York state regional/tri-state area and covers such performers as ZZ Top, Buddy Holly, Creedence, Chuck Berry, KISS, The Stones, Steve Miller, The Beatles and Tom Petty as well as originals. Starting in 2005, The band brings its show “Songs You Can Sing To” to the New York library circuit. This new show features soft rock favorites by such artists as Simon & Garfunkel, John Denver, Buddy Holly, Carl Perkins, James Taylor and The Beatles. Visit www.reverbnation.com/turnpikejoethetrafficjam.