Anyone with the fortitude to face a challenge head on, and get dirty while doing it, was probably at the second annual Long Island Tough Mudder on the grounds of the Old Bethpage Village Restoration on July 23-24.

Tough Mudder is an international sporting series that has been around since 2010 and is a highly-popular team-based athletic challenge that will host more than 120 events across the globe in 2016. The key event is the full Tough Mudder, a 10 to 12 mile obstacle course. What makes it unique is that it’s not a race—it’s a simply challenge, according to Jodi Kovacs, a member of Tough Mudder’s communications team. 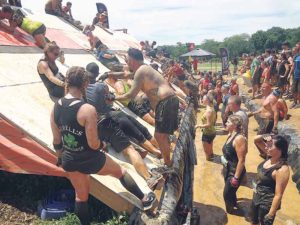 “It’s non-competitive and we don’t care how fast you go or how long it takes you to finish your course,” she said. “What we care about is that you’re having a great time and that you’re working to the best of your ability and as a team to overcome obstacles. You’re doing something greater than yourself. So, with the right preparation and mindset, anyone can do a Tough Mudder. It’s about community and camaraderie.”

This year, Tough Mudder drew more than 10,000 participants to Old Bethpage, a big leap over last year’s 7,000. The reason for the greater attendance, Kovacs said, was a new take on Tough Mudder held on Sunday, making the event more accessible this year for people from the community who might not have typically considered competing in Saturday’s full Tough Mudder. 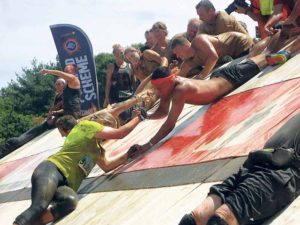 Old Bethpage has proven to be a popular venue with Tough Mudder enthusiasts and the layout of the Village Restoration—a living history museum that preserves life as it was on Long Island during the 19th century—ensures that the event provides participants with some unique aspects not found at any other Tough Mudder in the world, Kovacs said.

“I think this venue is beautiful and it’s a great place to hold it. It’s very open and the venue allows us the space to put some of our most compelling obstacles in,” she said. “Here at the Restoration Village, the obstacles are far enough apart that it makes for a really good challenge, but because it’s so accessible to spectators, family and friends, everyone can come out and cheer their loved ones on. And the lovely period homes of the Restoration Village make for a beautiful backdrop for the event.” 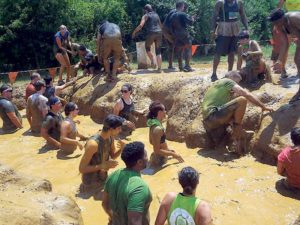 Participants trekked across the grounds of Old Bethpage Village Restoration, stopping at regular intervals to engage in difficult obstacles requiring strength, endurance and teamwork to overcome them. Many of these challenges—such as “The Block-Ness Monster,” “Pyramid Scheme” and “Dirt Destroyer”—involved contestants getting down and dirty in countless gallons of water and earth as well, giving blatant testament to the “Mud” aspect of Tough Mudder.

“It’s brutal, but I love it,” said Lance Grashim of Jericho, who was competing in his first-ever Tough Mudder Half after having successfully recovered from surgery earlier this year. “I’ve seen friends post about participating in Tough Mudder on Facebook for ages, but was afraid to try it myself. But after today, my goal is to get into shape and compete in the full Tough Mudder next year. I can’t wait.”

Given its status as a historical landmark, Kovacs was fast to note that Tough Mudder will be showing the utmost respect for the venue, sparing no expense in making sure that they leave it exactly as they found it. 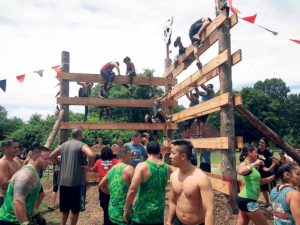 Kovacs confirmed Tough Mudder’s enthusiasm about returning the event to Old Bethpage again next year, saying that the unbridled passion Long Islanders have show for it—and the appreciation of local government and businesses—has helped to forge a strong partnership sure to last for years to come.

“Nassau County has been very helpful and cooperative. We love coming here and we have a very good relationship with the local community and we bring a lot of business to the area,” she said. “It’s a really great event, we’ve had a great turnout. We’re excited about the prospect of returning to Old Bethpage again next year. There a lot of people here having a lot of fun and we’d love to come back and give the people of Long Island a chance to compete in Tough Mudder once again.”