Hundreds of onlookers gathered at the park on July 24 in support of law enforcement for the event organized by Stewart Manor Fire Department First Deputy Chief Thomas Skinner, who said the recent targeting of police officers throughout the country spurred him into action. 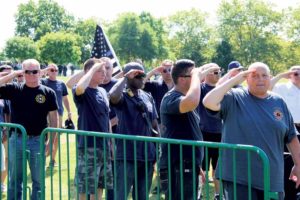 “I was watching the Baton Rouge police get shot and I just went to work,” he said, adding that the First Battalion chiefs, along with Mangano’s office, were behind him from the start. “I felt everyone would support this. But I didn’t realize it was going to get so big so fast. The real thing was that we had it happen fast because two weeks after these cops get shot, everyone forgets. I wanted it done the week of the tragedies of Baton Rouge and Dallas and the other 10 officers the mainstream media doesn’t report on that got shot on 911 calls.”

In total, 68 of Nassau County’s 70 fire departments attended the event, along with a robust representation of law enforcement, EMS, war veterans and more. About 200 fire apparatus lined each side of Park Boulevard, which splits the park, acting as a red line leading to the theater.

Among the attendees at the event was Acting Police Commissioner Thomas Krumpter and Sen. Jack Martins, who backed up Mangano’s statement that Nassau County has the backs of its law enforcement.

“Police officers are willing to give their lives to save ours and keep our families safe,” said Martins. “We can never take that for granted, nor can we ever say ‘thank you’ enough. The firefighters did an extraordinary job organizing this event and showing our collective appreciation to the men and women who keep our communities safe.” 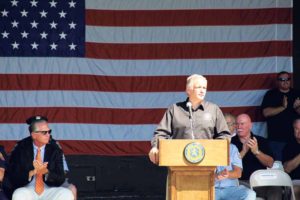 As the ceremony closed, Mangano thanked the county’s Bravest for supporting its Finest.

“With all the tragedies that have befallen our country recently, our police officers are the first line in maintaining order, safety and security,” he said. “Now, more than ever, they need our support so that they can continue to protect Nassau’s residents to the best of their abilities.”