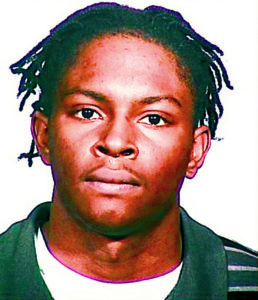 Drug addiction may have been the motivation behind a five-month long robbery spree that ended with the multi-agency arrest of Khalif House on June 8.

House, 24, is suspected of being responsible for more than two-dozen knife-point robberies committed at convenience stores and fast food restaurants throughout Queens and Long Island over the last three months. Law enforcement took House into custody in the parking lot of 8 South Tyson Ave. in Floral Park after he allegedly attempted to rob a College Point Dollar Tree and a Dunkin’ Donuts in Little Neck.

“It appears the suspect had a drug habit, perhaps heroin, which possibly could have been his motivation for these robberies,” said Nassau County Executive Ed Mangano during a press briefing at the Nassau County Police Headquarters in Mineola on June 8.

“That’s great news for us here as well as our neighboring counties,” said the county executive.

Mangano, who acknowledged and praised the hard work of the law enforcement agencies involved, said triumphant moments like this are the product of professional teamwork.

Teamwork was indeed the big factor in successfully capturing the suspect, as police departments from all over the New York metropolitan area came together to help put an end to the robberies. Officers from the New York City, Floral Park, Suffolk and Nassau County police departments were all involved in the investigation, along with assistance from the FBI and the U.S. Marshals Office.

House, who’s last known address is in Hempstead, led police on a foot chase after coming up empty-handed at both a Dollar Tree and Dunkin’ Donuts.

Moments after fleeing the dollar store, where a store employee fought back after being threatened and told to hand over cash, the suspect jumped into a gray Honda Accord, which police say was being driven by Lizette Veltri, 24, of Valley Stream, who possibly may have served as a getaway driver in the other robberies as well.

In response, police forces were deployed to surveillance the area in hopes of spotting their wanted suspect. It was only about 20 minutes later when law enforcement found House lurking outside a Dunkin’ Donuts, scoping out the activity inside, waiting for the perfect time to strike.

That’s when the manhunt began.

In a matter of seconds, the suspect hopped a fence and began leading police on a chase through neighborhoods and backyards where he ultimately lost authorities. As law enforcement continued their search, they came across the gray Honda Accord the suspect was seen in earlier that day. Veltri, still behind the wheel, ducked down when she was spotted by police. After giving contradicting statements regarding the suspect and herself, she was taken into custody.

That was when officials received a 911 call from local homeowners claiming that the wanted man was sleeping on their couch. But not before long, the suspect had allegedly left the residence before officers arrived.

A few hours later, law enforcement was tipped off that the 24-year-old was seen running through a neighborhood, near South Tyson Avenue, in Floral Park. Moments later, officers arrested House in the parking lot of 8 South Tyson Ave. at 11:13 a.m.

Both House and Veltri were arraigned in U.S. District Court in Central Islip last week and charged with Hobbs Act robbery-interference with commerce by threats or violence. House was remanded to the Nassau County Correctional Facility and Veltri was released on bond.