Photographic artist Xiomáro is continuing his odyssey to promote our national parks. While parks like Grand Canyon and Yellowstone get a lot of attention, the National Park Service sites on Long Island have a great history on their side and just need their stories to be better told. On Sunday, Feb. 9, he presented an illustrated talk at the Oyster Bay Historical Society Koenig Center about “The Other Side of the Fence,” photographs of what is believed to be where black slaves from the William Floyd Estate are buried.

His story contrasts the burial sites of the Floyd family members in an area bordered by a white picket fence with the black gravesite outside the fence. The family tombstones give the name, dates and descriptions of the dead while on the other side of the fence, wooden crosses painted white feature nothing but a first name: Charles, Caesar, Harry, Sam, Pompey, Lon and Isaac. Photographs from both sides of the fence illuminate the differences.

William Floyd was a signer of the Declaration of Independence and lived on the 613-acre plantation. Today his 25-room home, Old Mastic House, is part of the Fire Island National Seashore, part of the NPS.

Xiomáro explained that in the PBS series on the Founding Fathers, they said of using only one name, “That is how you make a slave.” You strip away their identity their name, their family so that they have no relevant connections to their former life.

Xiomáro (pronounced SEE-oh-MAH-ro) has been involved in processing photographs he made of the William Floyd home when it was being renovated. Twenty of his initial photographs of the furnished interior were recently exhibited at Fraunces Tavern in NYC; he is currently showing the photographs from the Other Side of the Fence at the African Burial Ground National Monument in NYC, another view of those photographs. He said the NPS is planning to have archeologists take sonograms of the black burial site, when funds become available, to see what/whom lies below the surface of the land.

Xio will soon be photographing the newly renovated Floyd house. He said it is amazing to see young members of the family sitting down casually on the antique furniture that is theirs. The house will have decorative items from Colonial times to the 1977.

Xio is still involved with photographs he took in the basement and attic areas of Old Mastic House: places the public never sees. He said he was allowed to see the coal room, closed for 20 years. There he discovered a colorful mural of NYC on a wall, and carved into the wood were boats in the harbor.

The William Floyd Estate has been inhabited by members of the family for about 250 years, with the exception of seven, during the American Revolution when the British took over the homestead. He quoted Lynda Day, Brooklyn College Professor of Africana Studies, making the observation that the slaves appear to be an “extended family. And, indeed, William Floyd must have trusted his slaves enough that he gave them guns during the Revolutionary War for them to fight to preserve his property and to preserve their home against the British.”

The family escaped to Middletown, CT in 1776 and when they returned the estate had been plundered. Their family documents had been burned but other historic records have been preserved stating that slavery was first brought to America by the English at their settlement of Jamestown. The first slave documented in the Town of Brookhaven was in December 1672, Richard Floyd, William Floyd’s father, purchased a man named Antony.

Over the years the family’s attitude changed about slavery and in 1862, John Gelston Floyd, Jr., the grandson of William Floyd, enlisted in the Union Army to fight in the Civil War. He saw his second cousin and commanding officer, Captain Franklin B. Crosby, getting killed in action.

The photographs of the two gravesites, on both sides of the fences, were shot in color, but Xio chose to print them in black and white, reflecting the realities of our American past. He tried to create motion and emotion, and a depth of feeling in his images. In creating the black and white images Xio used special software to create the dense blackness he wanted. He also uses a tilt lens to focus on a special area of his choice.

Xio has made the exhibit available to the public by going to Xiomáro.com to download the e-book of the work, which includes research he has done to compliment the history of the collection. You can also purchase copies of his photographs.

At the lecture he raffled off two photographs, one of the carved tombstone of Marian Floyd, wife of Charles L. Lindley, who was born on March 7, 1868 and died on July 23, 1887. The other photograph is of a white wooden cross that simply says “Harry,” with another cross set in a foggy field, manipulated to add depth and mystery to the picture. Linda Kikel and Nicole Menchise won the signed 5 x 7 inch prints of images from the exhibit.

Xio’s photographic journey is carrying him across the country. He will have photos of the interiors of William Floyd’s house as part of an exhibit at Stony Brook’s Long Island Museum.

Xiomáro became a part of the Oyster Bay landscape after his work photographing Sagamore Hill and his 2013 exhibition How I Love Sagamore Hill, which opened at the OBHS Koenig Center before traveling to Harvard University in 2014. 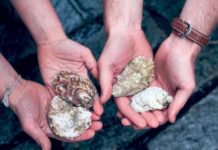